‘Personality of the Month’ article for Creswick and District News, April 2013

Barry Golding recalls driving through Kingston each day in the late 1970s on the way to work from home in a rented farmhouse at Kooroocheang, to Sacred Heart College in Ballarat East. The then Shire of Creswick called for public tenders for the sale of their Shire Hall in Kingston, which by that stage was in a very sad state. The back part of the building, built with triple-thickness, hand-made bricks dates back to 1860. Built by the Creswick and District Roads Board with John Hepburn then on the Board, the current 1911 ‘Creswick Shire Hall’ façade and new hall was added in 1911. By 1948 the Shire and Borough of Creswick had amalgamated and its administration had moved back to Creswick.

After being gutted internally for a post-war factory (that did not eventuate) and used as a local youth club, the hall interior was subject to vandalism and excess to Shire needs by the late 1970s. When Barry’s late father, Jack saw the building after Barry won the tender and paid a now small amount of cash for the building, Jack said it would cost too much to bulldoze. Barry put back windows, doors and internal walls that had been removed, and with family (including three children who went to Kingston Primary School, then Daylesford Secondary College, now all working in Melbourne) has made it a home for 33 years.

Born in Donald in north-western Victoria, Barry moved to Daylesford in 1976. He had completed a Science (Geology) Honours degree, mapping the rocks around Walhalla as his Honours thesis in 1971. This was followed by several years as a full time touring musician with Mulga Bill’s Bicycle Band, one of Australia’s first full time, professional ‘folk ‘bands, that played in hundreds of larger Australian towns in all Australian states in the early 1970s, and was selected to play by the then Whitlam government, representing Australia at the World Cup Soccer finals opening concert in Frankfurt in 1974. Barry says no other band played such far-flung and eclectic gigs as the outdoor Amphitheatre in Darwin, Thursday Island, Cunnamulla, the Festival of Perth, Alice Springs Rodeo, the 1973 Sunbury Pop and Nimbin Aquarius Festivals: curiously also the backing band for Frank Zappa at Festival Hall. For around 15 years while living in Kingston Barry played locally for bush dances with other local musicians in the Jacaranda Jumbucks and later Everyman and his dog. He says his decision to say ‘enough’ came with the sub-text of being booked for the Hearing Impaired Ball in Ballarat.

Living in Kingston since 1980 (with one year away teaching at Humpty Doo in the Northern Territory in 1984, before returning to Daylesford Secondary College to teach until 1988), longer-term Creswick residents may remember Barry training on the grass perimeter of Hammon Park in Creswick for the annual Australian penny-farthing racing championships in Tasmania, which he won three years running, 1978-80.

Barry made the break from school teaching to university in 1988 via a job coordinating the first Aboriginal education programs at SMB, then to Ballarat University College which became University of Ballarat (UB), before gravitating to vocational education and training research at Bendigo Regional Institute of TAFE. Having completed an Arts degree in 1984, a Masters in Environmental Science, several postgraduate education diplomas and a PhD in Education in 1999 about two-way transfer between university and the vocational education and training systems (most while working full time), Barry returned to UB around ten years ago to a senior lecturer position in the School of Education.

In his current (2013) role as Professor and Associate Dean, Research, in the School of Education and Arts at UB, Barry’s main area of research is in men’s learning and wellbeing. He says he was fortunate enough to be researching in rural adult and community education as the first community men’s sheds started over ten years ago, and has made research into men’s learning beyond paid work his international speciality, currently working on a book to be published in the UK in 2015 called Men learning through life.

Contributing to the spread, development and studies of the men’s shed movement, with 900+ sheds now in Australia, nearly 100 in Ireland and 50 in Zealand, Barry regards this as a great privilege. Now Patron of the Australian Men’s Sheds Association and President of the Board of Adult Learning Australia, Barry is acutely aware of the need to have accessible places and spaces available at community level, such as the Creswick Adult Learning Centre and Neighbourhood House and the Creswick Men’s Friendship Shed, one of the earliest in Australia and one Barry has an ongoing ‘soft spot’ for.

Barry is clear about the need to follow your learning, work and out of work interests with a passion, wherever it takes you. Most weekends he rides a bicycle 100km in a loop north to Tullaroop Reservoir and back through Majorca, Mt Cameron, Clunes and Ullina: deliberately very tiny communities and quiet roads. In the past few years he has worked with and visited researchers across Australia, in Greece, Portugal, Ireland, the UK, New Zealand, Finland and China.

He recalls first coming to Daylesford as an unemployed 25 year old, looking for a house to rent a room in Daylesford, and falling on his feet by becoming part of a local study organised by then Daylesford forester, David Parnaby. The research into hollow dependent mammals and birds in the Wombat Forest, with study areas near Daylesford, Spargo Creek, and Leonard Hill, later became the subject of his Masters thesis.

Barry retains a strong interest in the local environment, with a particular interest in the pre-contact landscapes of the DjaDja Wurrong Aboriginal Nation that includes Creswick. His main, recent UB undergraduate teaching area is in Indigenous education. Before Easter 2013 much of the Crown land in this region that form part of DjaDja Wurrong country was recognised for the first time in nearly 200 years as Aboriginal land, recognition Barry regards as very welcome and long overdue. 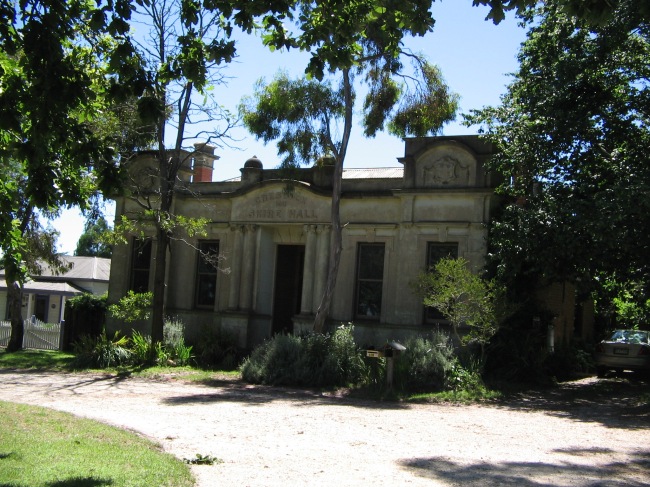