Given the generousity of my Scottish hosts, the least I can do is share my diary, emphasising the important and fascinating work underway with the Men’s Shed Movement across Scotland, with around 40 Shed already opened and 60 more in the planning stages.

Wednesday Oct 12 2016: A tour around some Sheds in Aberdeenshire, then by evening train to Glasgow

It was really relaxing last night to be welcomed at Aberdeen airport by my host Jason Schroeder after a day and half of continuous travel and walk into a small and homely rural space, and particularly to sleep mostly soundly in a very warm and comfortable upstairs bed. Though I woke a few times through jet lag I mainly slept solidly to 8am. A homely breakfast and a wander around the garden, with Claudia’s exquisite Mongolian yurt and Jason’s Sweat Lodge and male ceremonial area was illuminating.

The first day, Wednesday 28 Oct was spent visiting three Men’s Sheds in Aberdeenshire, in large rural towns that in Australia would likely be called ‘cities’, in Ellon, Inverurie and Westhill. Ellon and District Men’s Shed had only recently had its floor concreted. Much of their accumulated gear was stored in containers outside whilst the renovation and partitioning work was underway. The Shed also has access to a large area of land, now grassed along a former adjacent railway track. 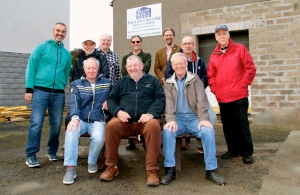 All three Sheds have enthusiastic members and are registered Scottish Charities with management committees operating out of Council owned properties under very cheap rental agreements. Some Sheds have up to 100 registered members but with a much smaller core of very active and very enthusiastic members. Jason Schroeder who hosted me and showed me around has played an important early role in all three, operating from a community development ethos.

All three Sheds are underpinned by the skills and energies of many ex North Sea oil and gas workers, some very recently displaced by the rapid and recent downturn in the industry locally. In all three Sheds, the social area is or will be appropriately and deliberately large to emphasise the value of the social, and also take account to the fact that an uninsulated Shed does not make a very warm or inviting area mid winter in a cold climate, high latitude region.

Inverurie Men’s Shed has a number of very well appointed spaces, not all contiguous. There is a large social area and a separate large, exceptionally well equipped Shed that includes a small blacksmithing area as well as wood and metal working equipment. It also has a very impressive large polytunnel community garden with many diverse late summer vegetables, indoor and out.

Westhill Men’s Shed was the first in Scotland, established over a period from 2009 and officially opened in 2013. Its story is well documented in my Men’s Shed Movement book. The former library building it has transformed is in a relatively new suburban area of Westhill. The floor area is huge and it is jam packed with mostly donated equipment, tools and stored materials. While in the Shed I met Jeremy Watt who has recently completed a PhD thesis, currently under examination, which is an ethnographic study of the ‘Carstonwood’ Men’s Shed in Scotland.

I am penning this part of my diary on the very comfortable evening train from Aberdeen to Glasgow, in 1st class with Wi Fi. I had a most interesting and productive day being shown around the three Sheds in Aberdeenshire with Jason. Jason and Claudia were exceptional and generous guides and hosts for my day here, and so far so good with jet lag. This time I saw very little of central Aberdeen itself, but from the little I saw again, this being my second visit here, the widespread use of granite in all manner and generations of buildings is simply astounding.

It was mostly fine in Aberdeen, but not all Australians would appreciate the grey Scottish conurbation and penetrating cold I experienced here today. The rail fare Jason pre booked for me tonight from Aberdeen to Glasgow was only 10GBP for a close to one hour train trip in warm comfort with wifi on my own in a first class compartment with complimentary coffee and trolley service. Thank you ScotRail.

Being a late arrival at Glasgow Queens Street a taxi to the Albion Hotel was simplest. A big and hot room but with only a dribble of cold water, resulted in a complaint to management and a welcome room shift next morning.

Tomorrow I am at University of Glasgow including for the afternoon Men’s Shed Forum, 72 capacity participants booked in, now turning people away, so much interest with Mens. Sheds growing here in Scotland. The decline of many industries in this region combined with population aging makes Men’s Sheds very timely in Scotland. Glasgow has a history of very early life expectancy amongst men.

The morning started after the traditionally unhealthy Scottish breakfast and a pre booked taxi to the Clydeside for a 8.40am BBC Scotland Morning Show radio interview. Richard Baynes, a writer, editor and producer who works freelance with the BBC was invited to join what was a very brief 3.5 minute interview. All I could do beyond the few generic questions was give a brief plug for SMSA and the Scottish Movement.

Afterwards I met with John Evoy from Ireland and David Helmers from Australia who are participating in today’s program in Glasgow as well as for dinner nearby our hotel this evening with people from Age Scotland interested in working with and through Mens Sheds.

The walk across to the University of Glasgow along the River Kelvin walkway was delightful. I met with Frances Gaughan, Mike Osborne’s PA to check all the admin arrangements were in place for today’s afternoon Men’s Sheds. The 72 participants registered are from a wide range of backgrounds and locations across the broader Glasgow region. At 11.30am I met over coffee nearby with host Prof Mike Osborne from CR&DLL, the Centre for Research and Development of Lifelong Learning at University of Glasgow.

The Forum was excellent. Willie Whitelaw, Secretary of the Irish Mens Sheds Association, willie@scottishmsa.org.uk his details from the program pasted below, was excellent on the front end, with David Helmers and John Evoy providing strong and pertinent support about Men’s Sheds in Australia and internationally respectively. The panels discussing the Research possibilities and ways the Scottish Mens Sheds Association might be strengthened on the end both worked really well. The first panel consisted of Steve Markham, a Health Promotions academic, Jason Schoeder from SMSA, John Evoy and David Helmers. The second panel consisted of Catherine Lido, a social psychologist from Glasgow University, myself, Harry McVeigh from Shettleston Men’s Shed and Saby Singh, a PhD from Glasgow.

Willie Whitelaw is a founder member and Secretary of the Scottish Men’s Sheds Association (SMSA). His interest in Men’s Sheds was ignited in late 2013 when a change of work, from community work to working with timber, prompted a search to find local people who could offer advice on woodworking. This search revealed the amazing world of Men’s Sheds, which seemed a perfect mix of making by hand and community development. With the help of the UKMSA web site & shed map, Willie met with some like-minded local people who created a small networking group; Glasgow Area Men’s Sheds (GAMS). Willie has a keen interest in huts, sheds, land use, woodlands & communities.

Steven Markham, mentioned above has recently completed a Masters dissertation called a Realist investigation of a wellbeing focused Men’s Shed, based on a study of a shed in The Republic of Ireland.

Dr Margaret Sutherland’s summing up at the end was exceptional, emotional and insightful. Margaret in Deputy Director of CR&DLL. This would be eminently suitable for publishing in an edited and extended paper.

The Forum archived excellent and very positive Scottish publicity as below:

BBC Radio Scotland – 13 October 2016 – 08:48:34
BBC Radio Scotland – 13/10/2016 08:48:34
The Men’s Shed movement will be the focus of a debate at Glasgow University on 13 Oct.
During the Forum it was announced that The Scottish Parliament was moving towards a second vote on leaving the UK, motivated in part by broadly held unhappiness about the recent Brexit decision.

Age Scotland Men’s Shed worker and Vice EO joined john Evoy and David Helmers over dinner at a nearby hotel. I was by now very jet lagged and was really glad to turn in early and get in total 11 hours sleep.

In summary, reflecting on my few days in Scotland I am most impressed by the SMSA approach. Their leaflet has six faces on their Board members on the cover of ages including one woman. The slogan is Inspiring and supporting Scotland’s Shedders. The message on the front of the leaflet is: Building Communities, Making a Difference, Leading Active Lives. Individual Membership of SMSA is free. By completing and signing the membership form members agree to the SMSA Constitution. Members get an attractive badge as well as a leaflet congratulating and welcoming them to SMSA with an exhortation to become actively involved. The email for contact is info@scottishmsa.org.au. The website is http://www.scottishmas.org.uk. SMSA office address is 72a High Street Banchory AB31 5SS. Phone 01330825529.

After packing I headed across Glasgow by bus and train towards Professor Aline-Wendy Dunlop and husband Robin’s place for a most enjoyable Scottish breakfast that doubled as lunch. Aline drove me to the Shettleston Men’s Shed for the afternoon visit, including students from a Master of Lifelong Learning and Social Change group. This a remarkably successful Shed, and the shedders were incredibly generous. I was later sent a link by Jane McBride to the 40th Anniverary of the Shettleston Housing Assocation that features the men. See
http://www.shettleston.co.uk/about-us/40th-anniversary-film/

I took an Uber back to Glasgow Uni with some students for a final debrief and enjoyable Caledonian Ale at a nearby hotel before picking up my bag from the Albion Hotel and a taxi to Glasgow airport for the evening flight to Dublin with Aer Lingus.