I was recently asked by Mark Winston, CEO of US Men’s Sheds Association to give my opinion as to ‘How will it [the COVID19 Pandemic] play out?’ it was a good question to focus my mind on this cold and wet autumn Australian morning. What follows is an elaboration on my brief personal response to Mark. It was published on 5 April 2020 but updated on 13 April as the situation across the US rapidly worsened.

But first, for essential balance amongst the challenging  ‘horseman of the apocalypse’  times  globally there is some  good news and positive observations from here in rural northern Victoria. Australia appears by 13 April to have flattened the curve.

The early April 2020 rain had led to a serious autumn soaking of the bush, paddocks and also our garden. We are still picking the last of the summer crop, have abundant and diverse tomatoes, quinces, Jerusalem artichokes (below) and carrots. We are still picking  zucchini, french beans, sweet corn, silver beet, beetroot, parsnips, onion, basil and grapes. 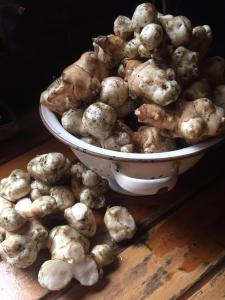 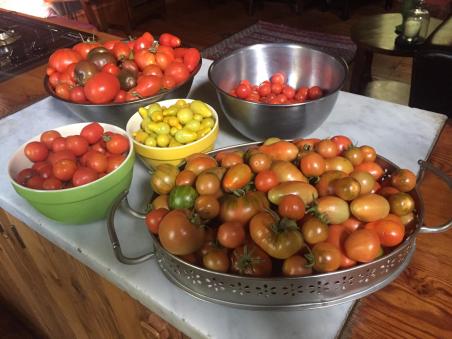 What is in excess we share. Foraging in the bush and on local roadsides has turned up blackberries, pine mushrooms, apples, pears and pyrethrum daisies (below).

Yesterday I planted some of the over winter garden vegetables: garlic, broad beans, kale and cabbage, and a few vegetables that will thrive well into autumn: lettuce, radish and coriander.

Having our daughter home whilst grounded internationally by the current crisis is a beautiful, unplanned  bonus. Daily food becomes something we can all enjoy and celebrate, albeit in restricted social isolation.  Riding  my bicycle in splendid isolation on deserted rural roads and walking in the bush and deserted rural countryside remains a safe, celebratory and therapeutic possibility.

Car outings are restricted to essential shopping and medical appointments and social distancing and hand washing become important. Meetings have been replaced by on line forums, email and phone.

I took a photograph in earl April,  below) of the Daylesford main street (20km from home) in mid week of the school holidays.

It has not looked as bare as this since I arrived in Daylesford in the mid 1970s. Most shops are closed aside for food and essential services, and for the first time in many decades there are absolutely no tourists in sight.

At home in Kingston there has been lots of bread making, baking, preserving and heaps of dehydrating (all varieties of fruit leather, plus apples, figs, mango, banana, paw paw, pineapple and tomatoes). A home made quince liquor will be ready a few months down the track and a roadside blackberry liquor made with some of my otherwise barely drinkable homemade 2009 pinot wine with added vodka is already a great nightcap.

In summary. as retirees beyond paid work who own our own home, have a shed full of wood for the winter and food in the garden and preserved, we are OK. Yes, our superannuation will have taken a very big hit ( I have deliberately  decided not to look and check), but at least we have some.m

Many people in Australia and around the world have no cash reserves, are living in close proximity to others, have no home, fiscal buffer or income, often combined with underlying chronic physical and mental health problems and sometimes huge debts. In theory as a 70 plus year old I am theoretically in a high risk category, In practice, my real concerns are with and for others.

In the big scheme of things we are infinitely more privileged as individuals, as a family and as Australians generally than the vast majority of people in  the world. We debated over dinner last week as to how we should feel about this privilege and whether it should include guilt and shame. In this rural area we have very good nearby medical facilities, excellent mobility, communications, government services, energy, a reliable supply of food and a relatively caring and sharing community, family and friends. The last three are what matters most in adversity.

My response to Mark’s big question at the top of this blog was that I guess everywhere in the world will be affected and transformed differently, but everywhere its effect and our response to it  will necessarily be from the bottom up. How fast the virus spreads is up to us, dependent also on the commitment of resources and expertise available for testing and tracing those infected, and on government policies about movement and lockdown.  Those regions, families, peoples, nations and communities already wracked by inequality, poverty and conflict will suffer most. There will be many deaths perhaps in the tens of millions, much misery and suffering, and a very long tail of recovery involving people, community and economies. All of this is a tragedy.
We will need to learn heaps of important lessons about our interconnectedness and the need to act more in the common and community good. The recent bushfire crisis in Australia brought some of this home to Australians and the world, that we are already in a climate crisis together.
As an adult educator, I sense we will learn heaps of hard lessons from this dreadful and challenging experience.
Each nation is tackling the response to the crisis differently, and the shape of the curve that tracks infections and deaths mirrors these different responses. We would do well to look carefully at these trends and learn from them.
I sense there was a longer period of denial and hesitation to act in a timely and appropriate way in some countries at the top, most particularly in the US,. This pandemic can only be solved in the long term by evidence and science. The anti-science stance of the US  President, combined with  his shambolic national response to the evidence of its spread and it’s deadly nature for older and health compromised groups had by 13 April led to the virus to become rampant and deadly right across the  US.

The Guardian article on 13 April 2020  by journalist, Ariel Dorfman notes his earlier warnings about the dangers of Donald Trump’s attack on science in 2017. Now Dorfman says that ‘even those dire predictions did not go far enough as the president’s response to Covid-19 begins to play out’ in the US:

Today’s chaotic and bumbling response to this emergency [in the US] is no accident, but deeply rooted and systemic, the direct result of a pattern of callow benightedness that verges on the criminal and that goes back to the very start of Trump’s regime, embedded in the very recalcitrant anti-intellectual DNA of this president and his followers.

If, back in October of 2017, Trump seemed a remote, albeit inadvertent, disciple of the fascist general who shouted “Long live death!” all those decades ago as democracy was being destroyed in Spain, today I see him as someone far more terrifying: the personification of one of the horsemen of the apocalypse, the one riding the white horse of pestilence.

I can only hope  that the wisdom and expertise of health experts and other levels of government in the US and other nations will hold us in reasonable stead over the long haul. In some other countries including the US and Brazil, health experts are publicly contradicting their Presidents to try and minimise the infection rates and flatten the deadly curve.  Without a vaccine this global pandemic will exercise its deadly will on its own timeline, with the peak reduced and the curve flattened  if people and governments are responsible and rational and learn from the early mistakes.
Given my particular interest and expertise in older men’s well being. many older, isolated men in the Men’s Shed demographic will be impacted very severely. Men’s Sheds everywhere are now totally locked down
These are incredibly difficult times. I sense that worst is yet to come, including for peoples across Africa, Asia and South America as well as many countries and states in Europe, the Pacific and North America where poverty is endemic and some governments are in denial.
Business, economics  and work as usual are neither morally or economically rational, in my view. Our economy is built on trust and our environment on sustainability, which have both turned out to be more fragile than many of us had imagined. We live in a web of life, and in a global pandemic, can still get seriously entangled in the web of disease and death caused by a tiny, infectious, rampant virus.
I should stress in conclusion that none of us including me are experts in any of this. We are in relatively uncharted waters.
I do note that  this is not the first pandemic that has decimated people on the Australian continent aside from the Spanish flu. Smallpox was introduced  here by the colonial invaders and caused great suffering and huge loss of life in two pandemics from 1789  and the early decades of 1800s, particularly along the Murray-Darling river systems of inland Australia. By 1840 syphilis in the area I now live in was endemic and deadly amongst Dja Dja Wurrung women, introduced first by sealers and whalers and later by convicts, labourers and squatters. Other introduced diseases hitherto unknown in Australia including pneumonia, tuberculosis, whooping cough and diphtheria  have since caused huge mortality amongst First Nations people in Australia and many other areas of the ‘New World’ aside from the widespread murders, rape and violence associated with colonial conquest and dispossession.
I mention this because the descendants of those same First Nations peoples in Australia are in 2020 much more likely also to be prone to the current pandemic and on average have more limited resources or medical facilities to cope with its deadly onslaught.
Importantly all the best meantime to people and their families who chance to read this or choose to forward it on to others.
Thank goodness we have a democracy in Australia  where we are free to speak our minds and share it publicly in this way without the fear of persecution. Unlike in the US, we have national and state governments that have mounted a relatively swift, united, evidence based, humane and timely approach. Having a relatively well resourced, accessible, affordable  and equitable public health system in Australia is a huge bonus.