in Stevns, Denmark, officially opened 15 September 2015, one of nine sites where ‘Men’s Shed’ type organisations are being established, based on the Australian concept, with a ‘Danish cultural twist’. 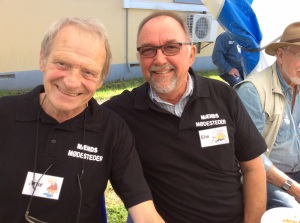 ‘Shedders’ in the Stevns Maens Modesteder after the opening.

Established in Malmö, Sweden by expatriate Australian Will English (in black sweater) and friends. Photo taken by Barry Golding, 14 September 2015

Adjunct Professor, Federation University Australia: researcher in men's learning through community contexts, author of 'Men learning through life' 2014) and 'The Men's Shed Movement: The Company of Men' (2015). View all posts by barrygoanna